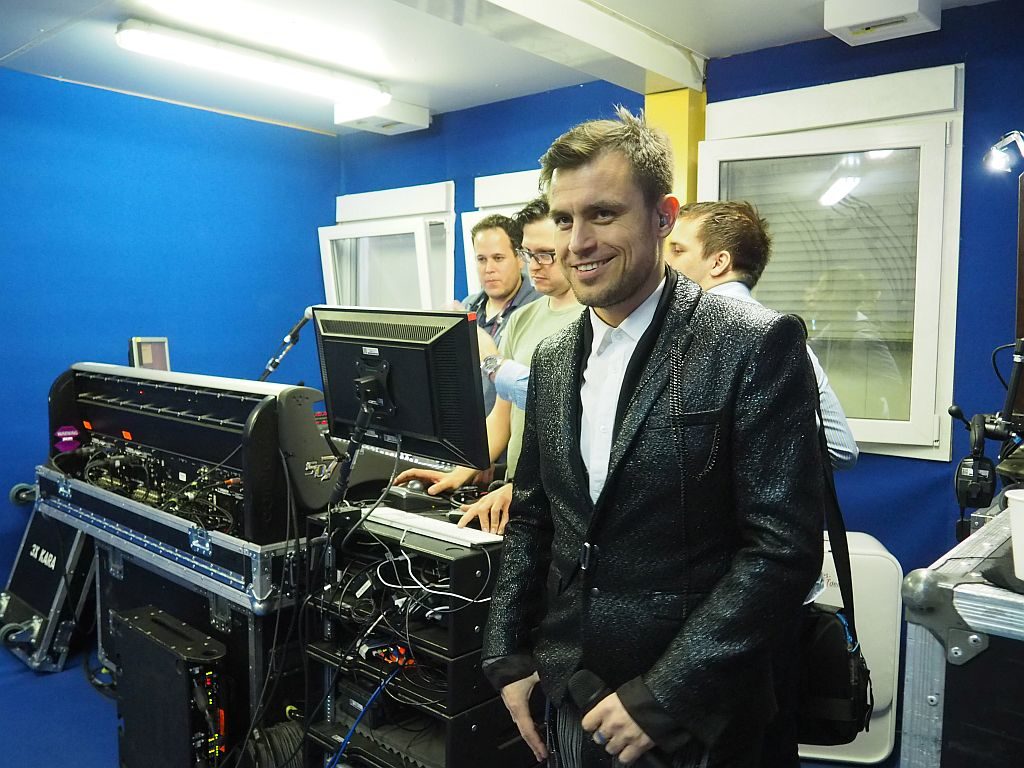 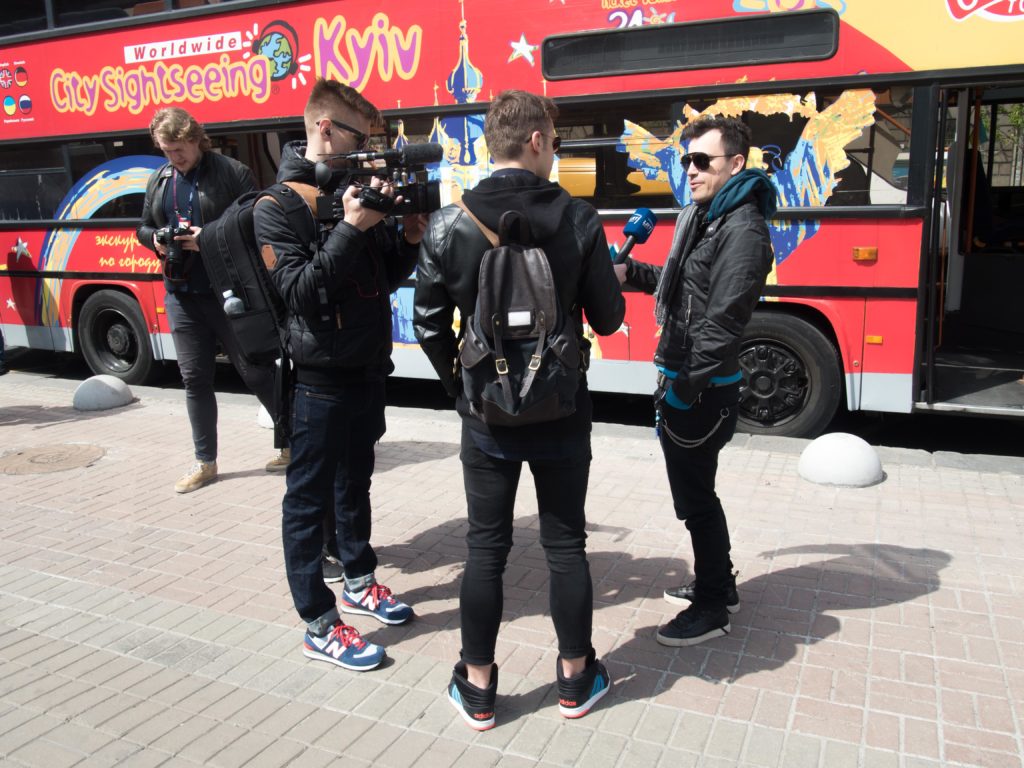 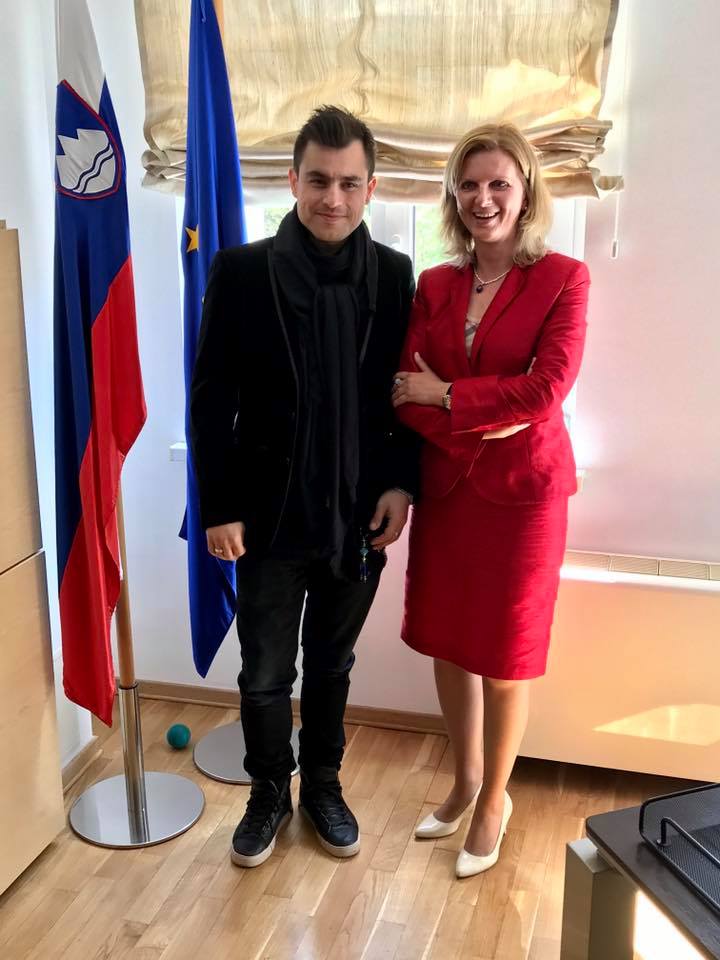 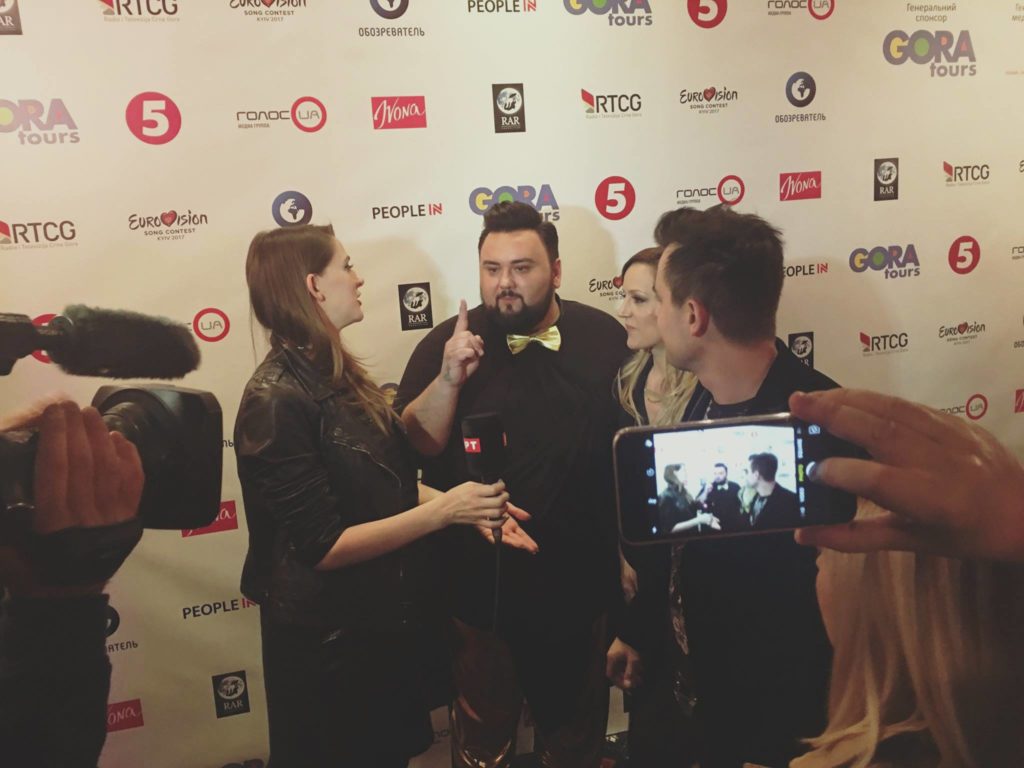 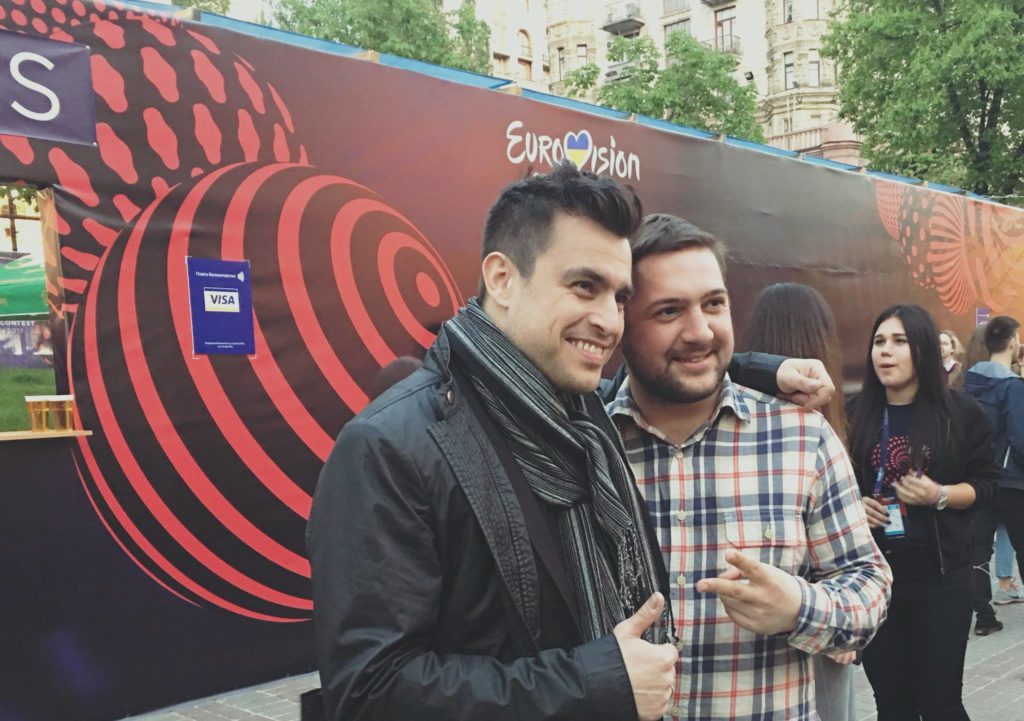 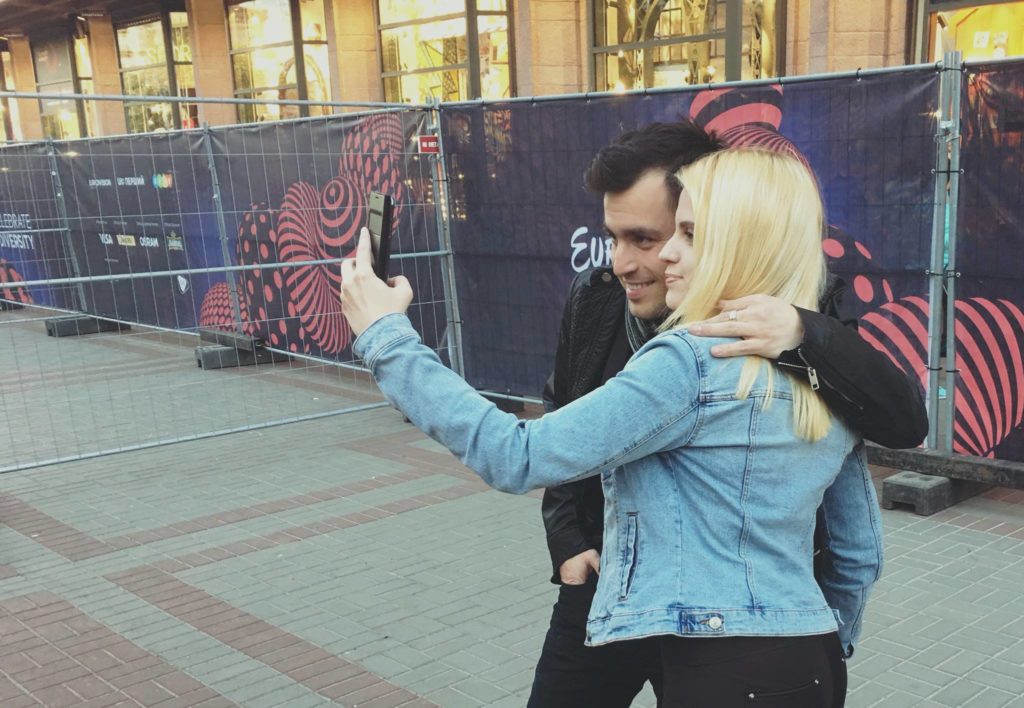 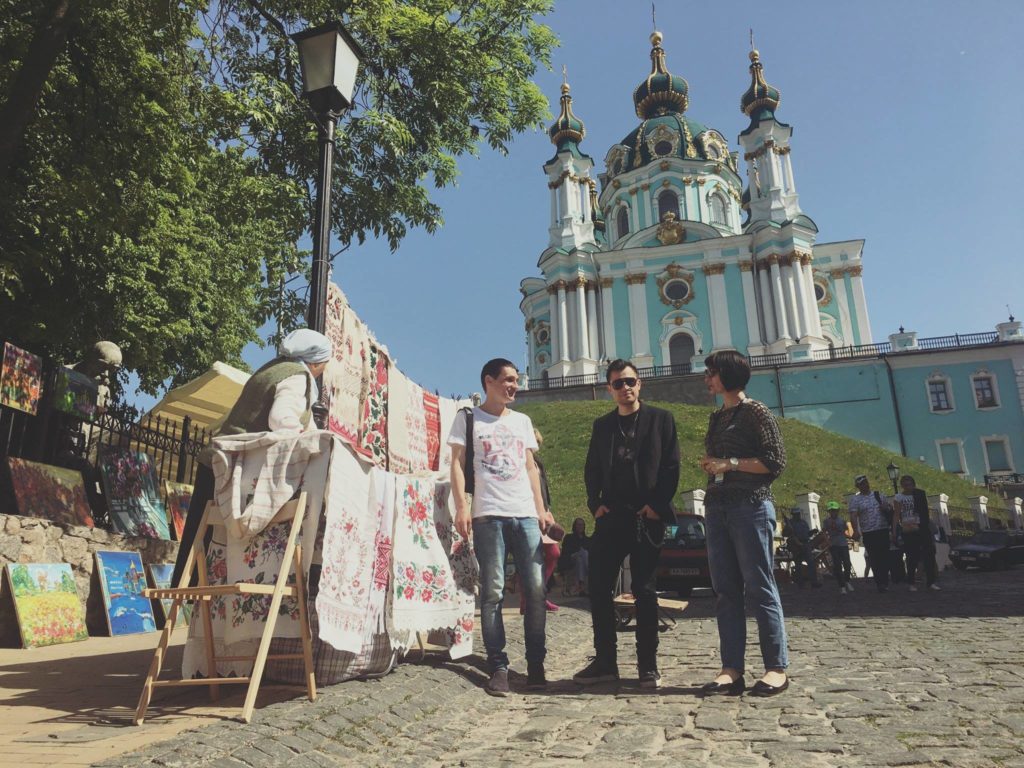 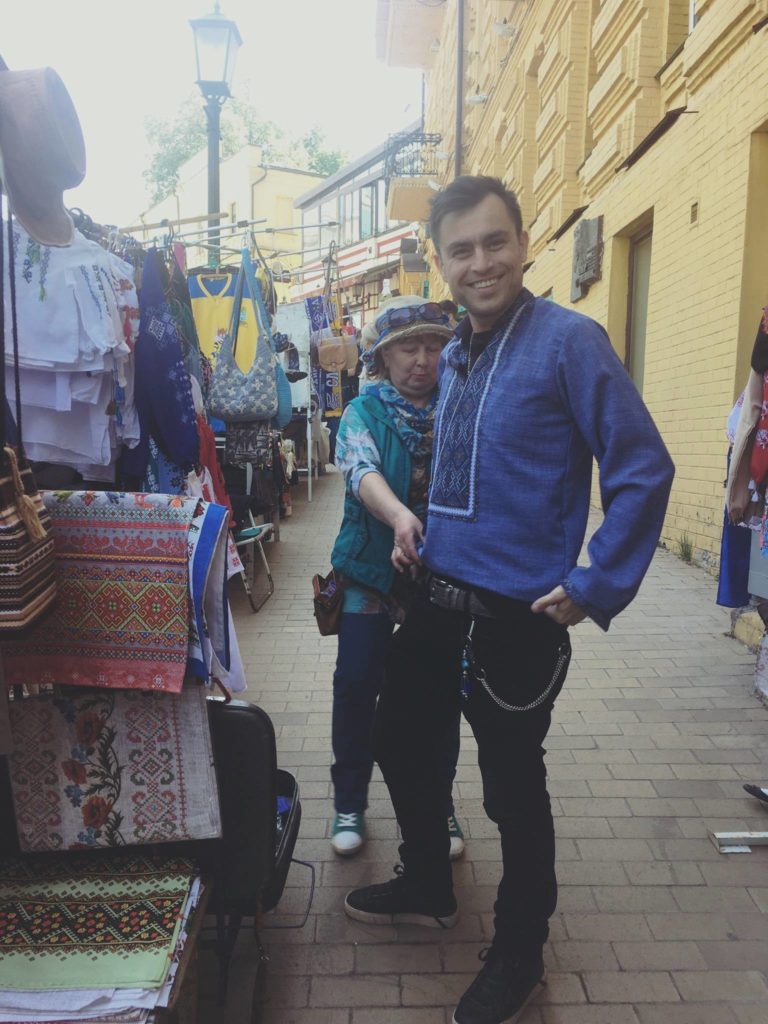 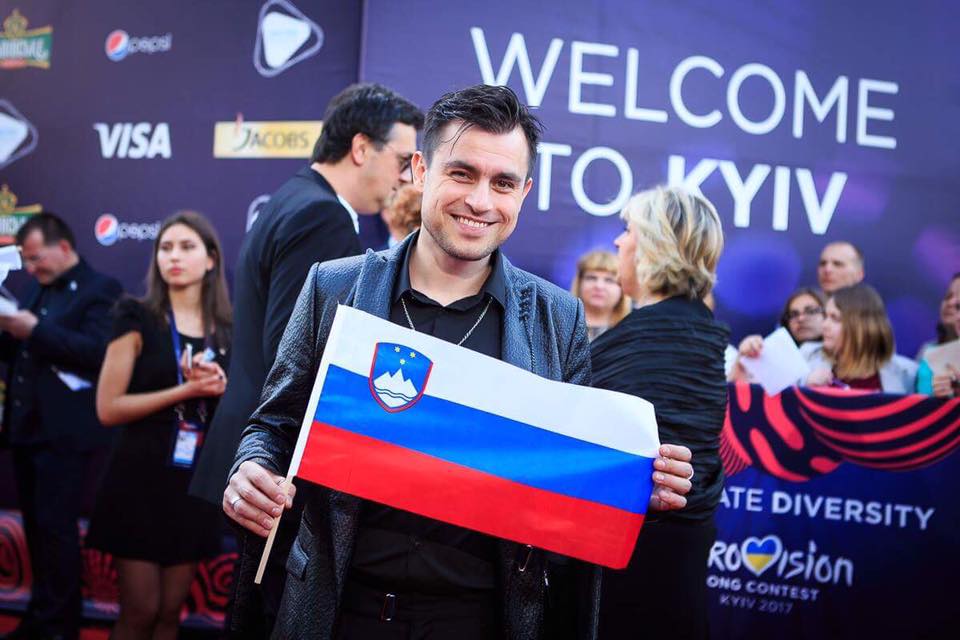 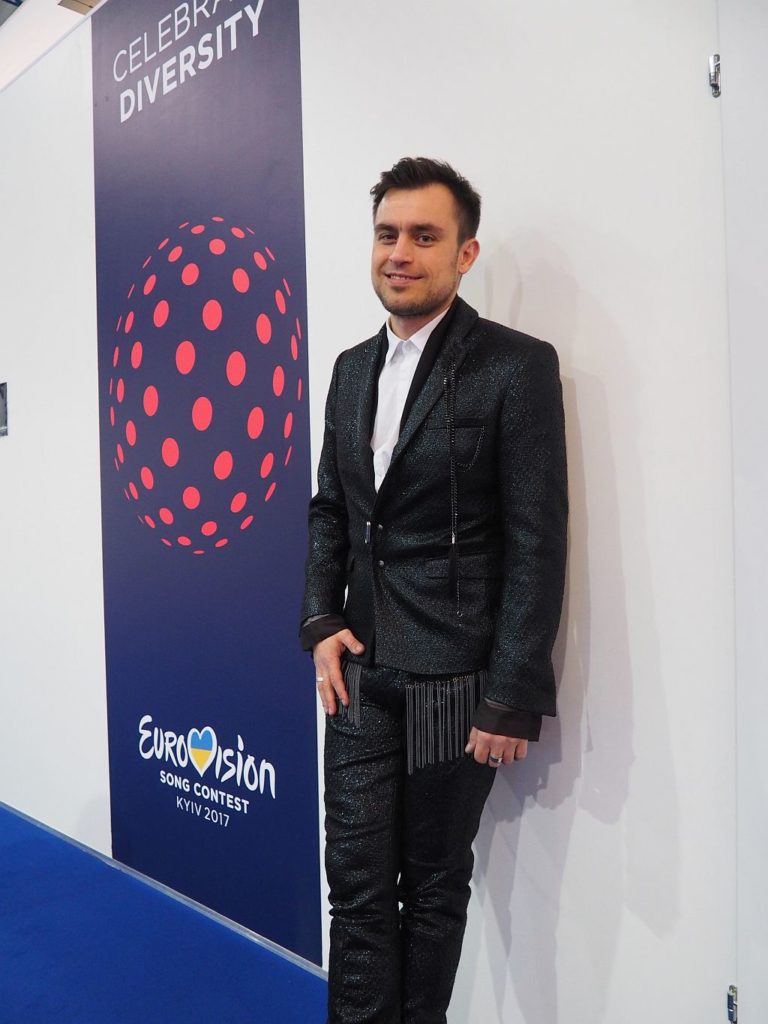 Following on from his victory at EMA 2017, Omar Naber has had quite a busy time of it – there’s been a media frenzy, he’s been part of no less than three international Eurovision events and he’s performed at the Slovenian Song Festival.

“The journey up until now has been a fantastic experience, if a little exhausting,” says Omar, reflecting on the time that has passed since his triumph at the end of February. “I’ve enjoyed every moment of it and am really looking forward to the new challenges that lie ahead.”
Now, with only five days left before he leaves for Kiev, he has just held an exclusive rooftop audience in Ljubljana with special guests from the media as well as those from the music industry who have been part of his career in music in recent years.
“I am delighted that there are so many of us gathered together here today for this event. Everyone’s support means a lot to me and the interviews I’ve given today and all the well wishes I’ve received are such a nice farewell to leave for Kiev with.”

Omar travels to Kiev on Sunday and the day after, his first rehearsal on the immense Eurovision stage awaits him.

As he makes his final preparations for his departure, Omar is keen to promote a positive image of Slovenia via his song.

“I am proud to say that I live in Slovenia as it is a beautiful and diverse country.
We may be a small country, but everything here is pristine and looked after.”

Omar Naber, Slovenia’s representative at this year’s Eurovision Song Contest, has just completed a whirlwind promotional tour which has seen him visit the UK, Israel and the Netherlands in the last few days.

He kicked it off on Sunday 2nd April at the London Eurovision Party at the Café de Paris, where he was one of 25 performers.

A day later he left the British capital and travelled to Israel for Israel Calling. There, at the invitation of the Israeli Ministry of Foreign Affairs and the Ministry of Tourism, Omar and all of the 28 national Eurovision representatives in attendance, planted their own tree in a Eurovision forest.

At the Israel Calling concert in Tel Aviv, Omar wowed the audience with his performance of his entry “On My Way”.

The Netherlands was the next and final stop on Omar’s promotional tour. At Eurovision in Concert in Amsterdam he took to the stage with another 35 of this year’s artists.

“The last week has been very dynamic and intense – even strenuous – but I have thoroughly enjoyed it,” said Omar.
“My song was very well received by all the audiences and it was great to have them singing along with me. I’m also glad that I got to meet almost all of this year’s other national representatives while I was on the road.
I’ll most likely keep in contact with most of them after the Contest.”

A new challenge awaits Omar this Saturday after arriving home. He will step out onto the big stage at the Ljubljana Slovenian Exhibition Centre, accompanied by the RTV Slovenia Festival Orchestra, and perform the song “Miže” (Žiga Pirnat / Andraž Gliha) at the Slovenian Song Festival.

The video for a new Eurovision version of Omar Naber’s ballad “On My Way” has been shot and will be exclusively premiered this weekend on Sunday 2nd April at 20:00 CET on the Eurovision Song Contest’s YouTube portal.

Since it triumphed at EMA last month, the arrangements of the track have been remixed slightly by arranger Žiga Pirnat for live performance, with the instrumental part of the song being performed by the Budapest Art Orchestra – who were involved in the recording of the 2014 winning song “Rise Like a Phoenix”, which was performed by Conchita Wurst. The alterations were completed via Skype from Los Angeles, where Pirnat works and lives.

The video was shot by the Kolektiv TRETJEOKO and the video includes a dance performance by Jernej Kozan – the winner of the TV show Slovenia’s Got Talent 2015.

In the month before the Eurovision Song Contest, Omar will be undertaking a whistle-stop promotional tour, taking in the UK, Israel and the Netherlands.

On Sunday 2nd April, the night the video premieres, he will perform at the London Eurovision Party event, before travelling from the British capital to Israel, where he will continue to promote the song and perform at Israel Calling on Wednesday 5th April. He will round off the tour with an appearance at Eurovision In Concert on Saturday 8th April, in Amsterdam.

Before embarking on his travels, he will perform this evening at 22:00 CET in Orto Bar with his own band – a specially-prepared concert for his Slovenian fans.